Among the strangest places in the world, surely we must include these particular baths located in Japan, these spas, given their geothermal and morphological peculiarities, are known by the name of Jigoku, that is hells, because there are 8 and yes they all find in the city of Beppu.

Beppu, is located in the south of Japan, on the island of Kyūshū, considered the most volcanic area in all of Japan, given the presence of thousands of thermal springs, as well as caldera, fumarole and sulfatare.

The thermal waters were used by the population for the creation of the famous onsen, instead, where the hand of man has not changed the nature, we find very unusual places, such as the famous eight inferno Beppu, geothermal sites that are very reminiscent the classical depictions of hell. Six of the hells are located in the Kannawa district, while the other two are in the Shibaseki district. 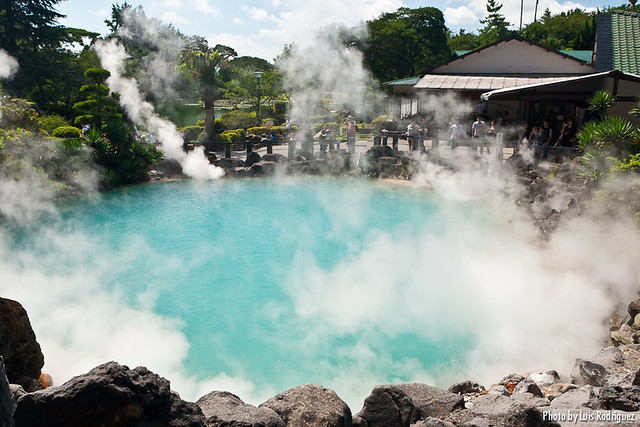 Umi Jigoku (Hell of the Sea) is one of the most beautiful, given its turquoise color, from May to November is characterized by the presence of lotus flowers with leaves so large and robust to support the weight of a child. 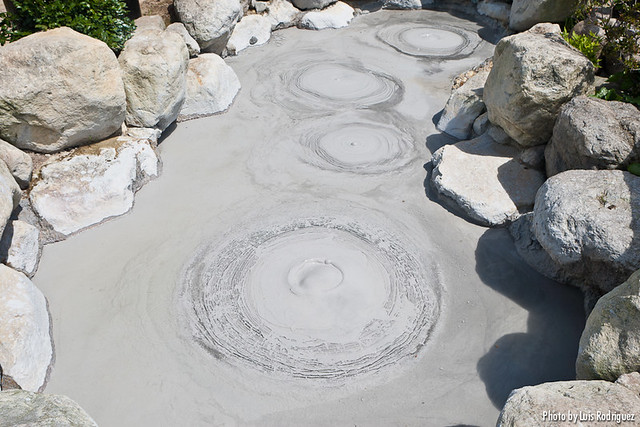 Oniishibozu Jigoku (Hell of the Mud Bubbles) is characterized by the presence of mud bubbles that emerge from the great lake, even if in reality the place is known as "hell of shaved heads" because the bubbles remember the shaven heads of the monks. 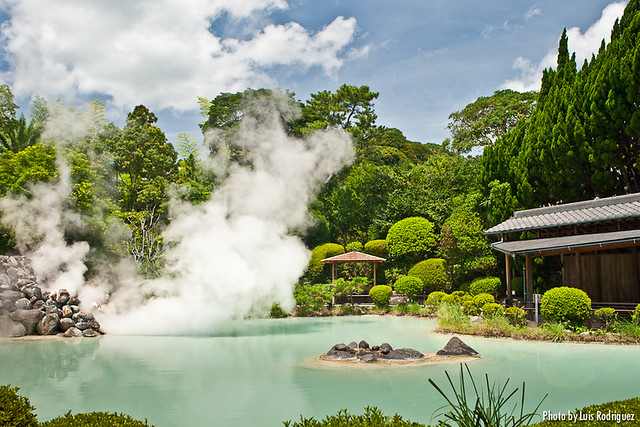 Shiraike Jigoku (White Hell) is indeed characterized by warm white water, almost similar to milk. In this case we can say that hell is surrounded by paradise, in fact around there is a typical Japanese garden where you can relax. 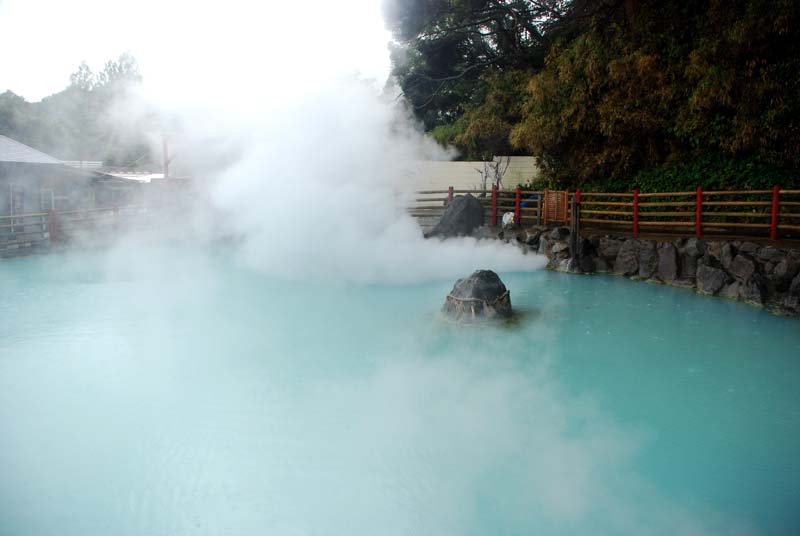 The particularity of Kamado Jigoku (Cook's Hell) is certainly the presence of a large statue that represents the devil as a cook, which is not difficult given that the water here reaches even 100°, around the main lake there are other small lakes and many springs You can also try different steamed snacks directly on the hot spring. 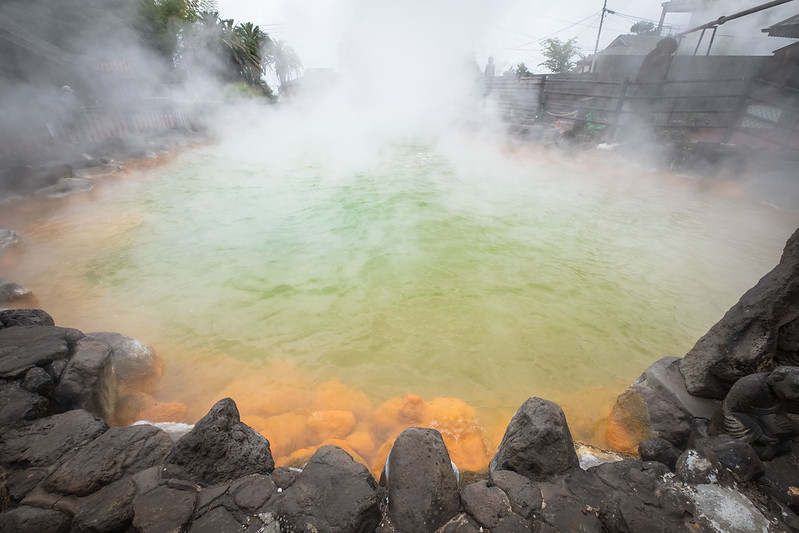 Oniyama Jigoku (Crocodile Hell) is obviously so called because of the large number of crocodiles present in this spa, the crocodile breeding in this place began in 1923, today has 80 specimens. Every Wednesday, Saturday, and Sunday, at 10.00 you can watch the "launch" of the bait "that is when food is given to the crocodiles. 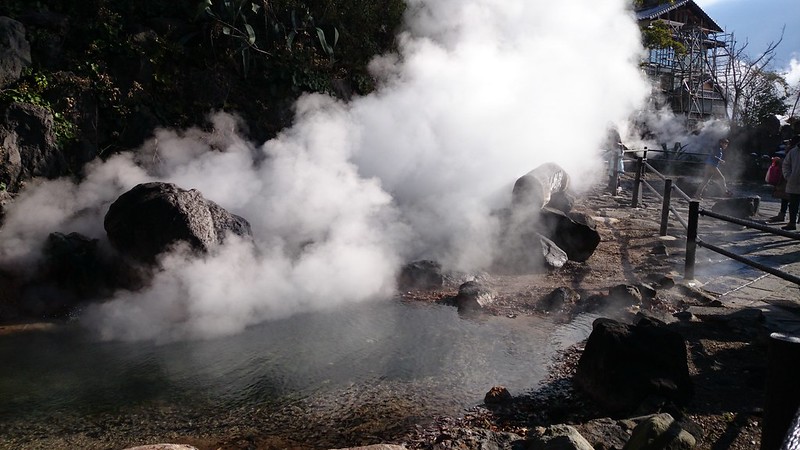 Yama Jigoku (Hell of the Mountain) is characterized by the presence of fumaroles of boiling water with an average temperature of 90 degrees. In this place there is also a small zoo that houses several species, including pink flamingos, hippopotamuses, monkeys and African elephants, which are able to survive due to the high temperature of the area. 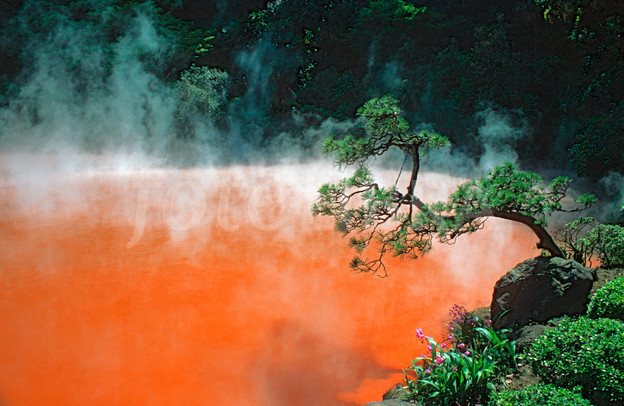 Chinoike Jigoku (Blood Hell) is surely the most particular and also the most similar to hell, because here the waters in addition to reaching the temperature of 78 degrees celsius, are also blood-red. 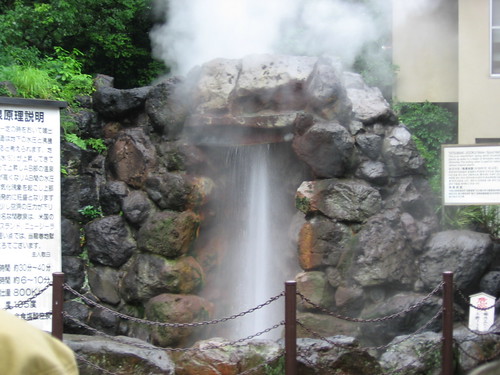 Tatsumaki Jigoku (Cyclone Hell) is more than a lake, here we talk about a geyser, with a regular jet, about every 30-40 minutes, of boiling water with a temperature of 150 degrees.

More in this category: « Lucky and unlucky numbers around the world Hua Shan: the most dangerous path in the world »