The Spanish Festival of which I speak to you today is quite particular, also because the main actors are children, precisely infants.

This festival is known as the "El Colacho" (Jump of the Newborn, or Baby Jumping), and is a traditional Spanish festival, which takes place in Castrillo de Murcia, a community in the province of Burgos, organized and managed by the Confraternity of the Blessed Sacrament de Minerva.

This festival is celebrated every year since 1620 and is related to the Catholic celebration of Corpus Christi, that is the Religious Feast of the Eucharist. This festival has a duration of about a week, but the most-awaited and most felt moment is the one that takes place on Sunday at 6 pm, that is El Colacho.

To fully understand the symbolic meaning of this feast, we need to understand what we are talking about. You must know that the Spanish term Colacho means Devil, so it is the Devil's Leap.

Some men represent Il Colacho, the Devil, wearing clothes with yellow and red , just to indicate the flames of Hell, an obstacle course is created with mattresses, on which lie the children born during the previous year. El Colacho must overcome this path by jumping mattresses. As the mattress is passed, rose petals are tossed onto the newborns as a kind of blessing.

At the end of the ritual, the children are returned to the mothers, while the "Devils" hurl themselves, in a completely harmless way, on the surrounding crowd hitting passersby with a whip, then the procession continues to the church of the village located at the top of the The members of the Confraternity of the Blessed Sacrament de Minerva also take part in the procession. 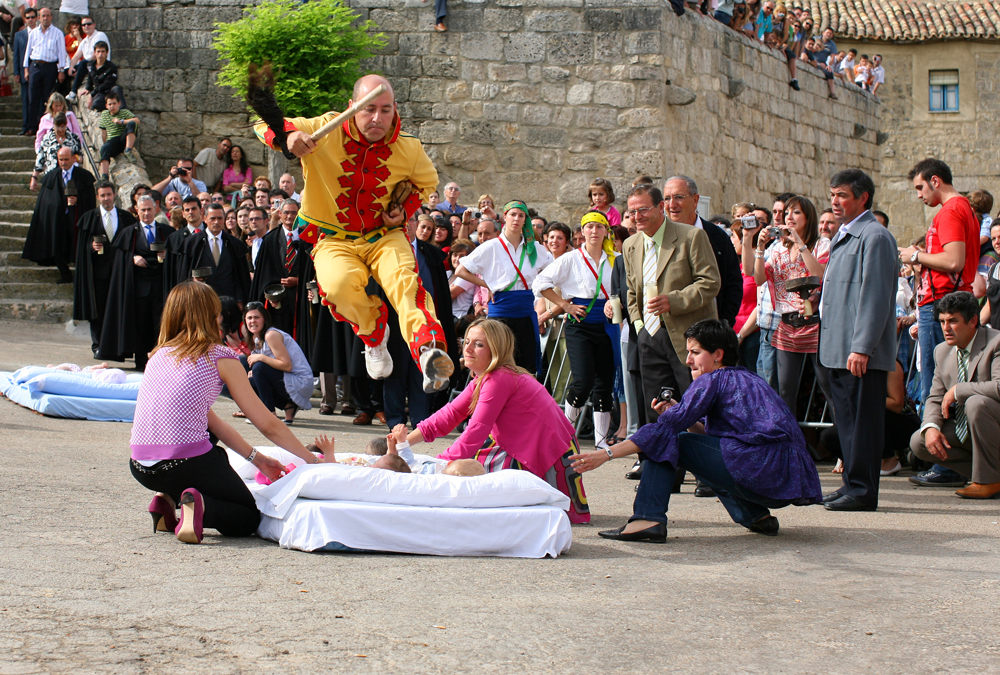 What were the origins of this Spanish festival, is currently unknown, and therefore also the real symbolic meaning is hypothetical but certainly not, the fact is that all those who take part in this ritual, believe that serves the purification of original sin, as well as ward off evil spirits. In modern times, the Church has had to complain about this particular Ritual, in fact the previous Pope, Joseph Aloisius Ratzinger, had asked the Spanish Priests to distance themselves from this custom, because as you know, it is the Holy water of Baptism that purifies from original sin, and not a Devil's hop.

More in this category: « La Calabiuza: the Feast of the Dead in Tonacatepeque Cosplay around Tokyo »