Sixty km between Italy and Switzerland at breathtaking altitudes: it's the magic of the Bernina Red Train!

In era marked by low-cost intercontinental travel, where for a few euros you are catapulted to the other side of the globe, the "slow" travel has come back into fashion. The train, by itself, is the slow way par excellence that allows, while comfortably seated in an armchair, to see a film made of different landscapes, faces, stations, and skies flowing out of the window.

In Europe the Bernina Red Train is an excellent example of a railway route: 60 km narrow gauge between Italy and Switzerland, reaching up to over 4000 meters altitude! A breathtaking railway that has become a UNESCO World Heritage Site since 2008. 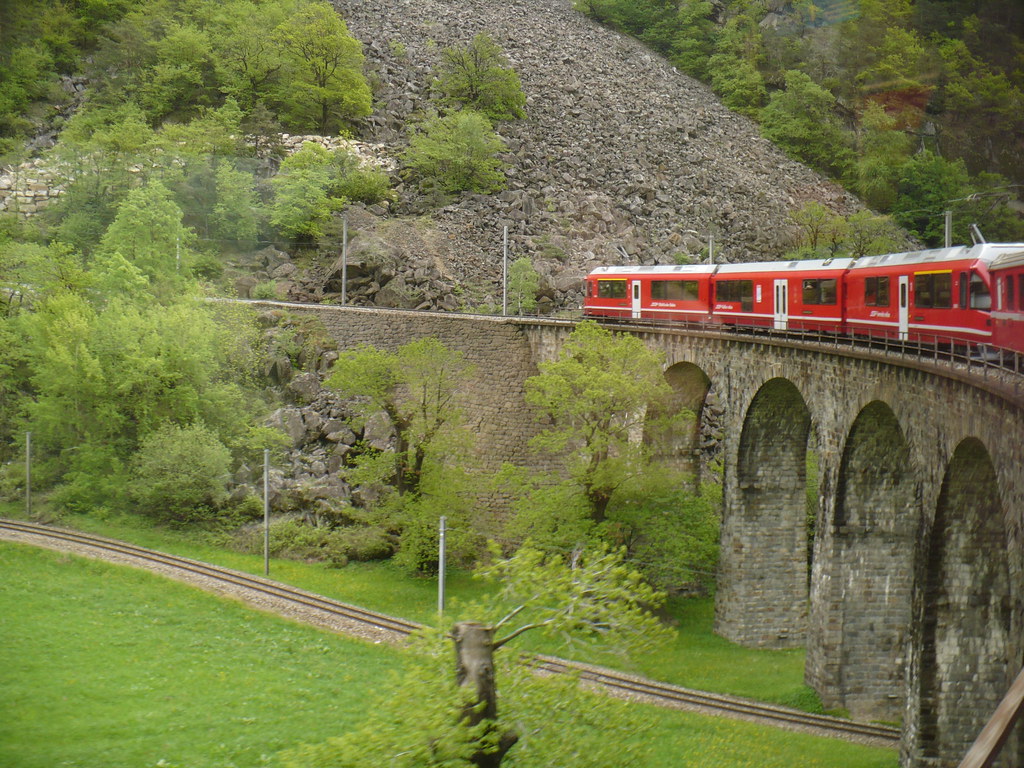 The departure of the cars is in Tirano, in the province of Sondrio. Here you can choose the most suitable type of wagon: heated in winter or convertible and discovered in summer. The next stop is Campolongo: from here passes the Italian-Swiss border that welcomes the canton Grigione. From here, then, the train begins its slow ascent through an area of fruit trees that reaches Campascio: but it is in Brusio that the path becomes extraordinary! From here, in fact, the train (which we remember travels on a narrow gauge railway) crosses a helical viaduct that allows you to tackle the difference in height of 30 meters with the sole force of hydroelectric energy! 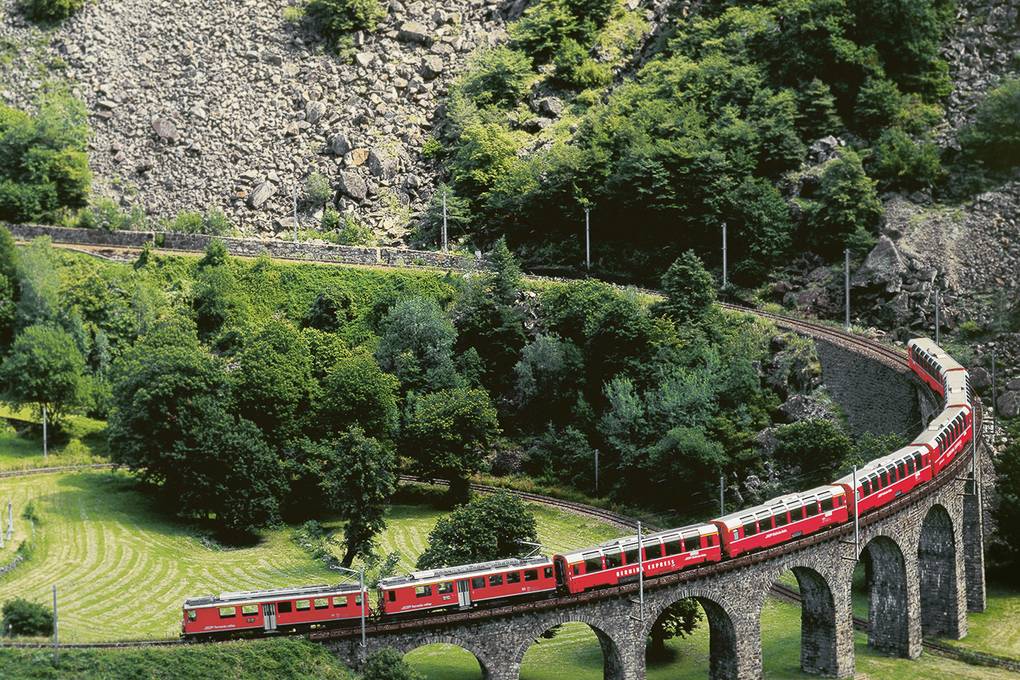 After passing the viaduct, the train reaches Poschiavo, an elegant town full of small museums and collections: from here you enter the Val di Pila and start testing the scent of Bernina. While in the darkness of the tunnels, the train makes a 180-degree turn, the train stops in Cavaglia: here the miss the "giants' pots", 28 holes in the rock, the result of the glaciations that followed during the various geological eras. 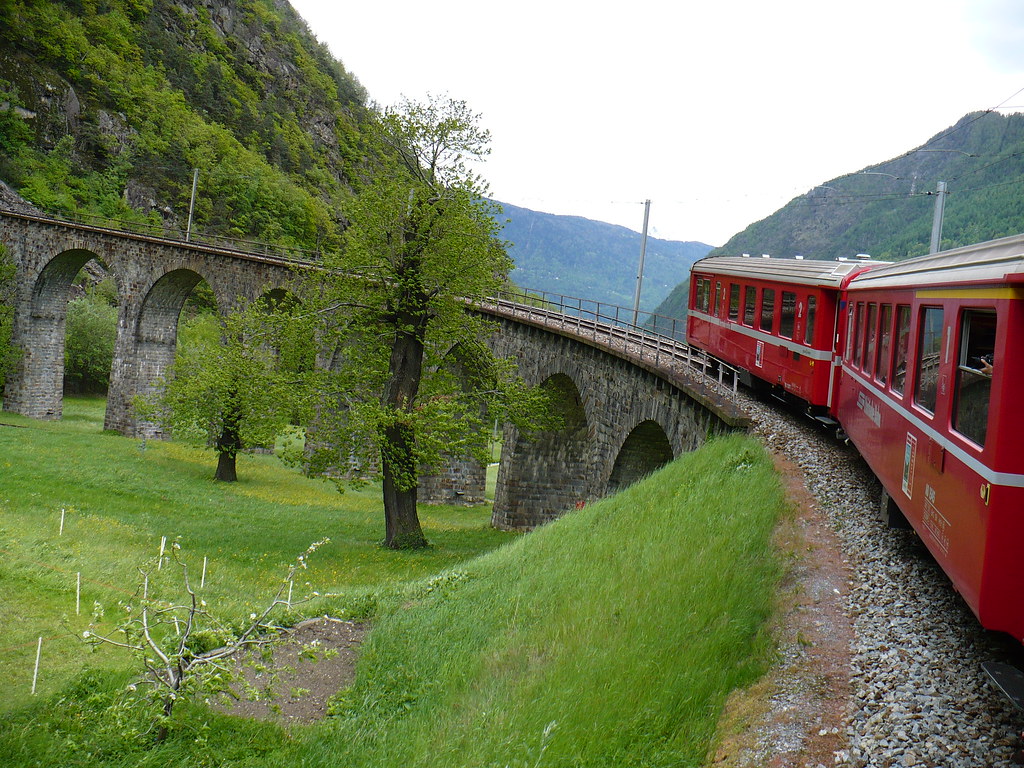 Leaving behind the Cavaglia plain, the red snake climbs up to the Palù pond and then reaches Alp Gruem, a dream destination for hikers and photography lovers. You then reach Ospizio Bernina, at 2330 meters and, after passing the enchanting White Lake, you reach Lagalb, a ski resort where you can enjoy  through the snow at high speed, just like Bernina Diavolezza, some km after, where skiing and trekking are .

Do not miss a stop in Morteratsch where the language of the Bernina glacier almost seems to greet the who have arrived here. We are now a few miles from the end of our journey: Pontresina, penultimate stop, owes its fame to Clara Chris, a young tourist entrepreneur who had the intuition to rent the redundant rooms at her home. And here the train reaches its final destination: the prestigious St. Moritz, the city of the "champagne climate". 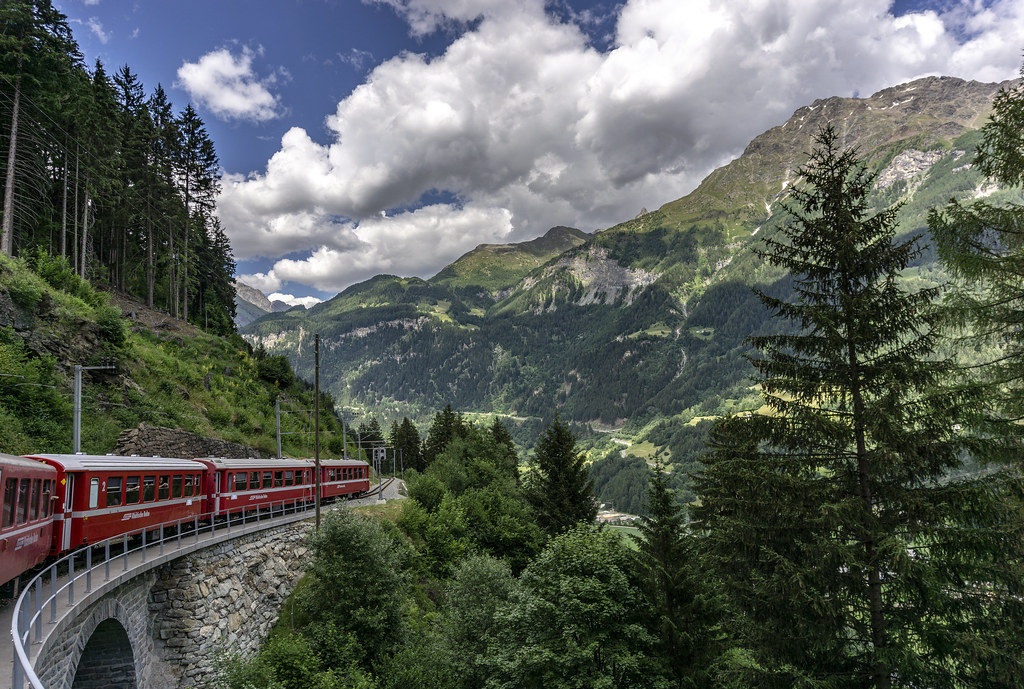 The route of the Red Train is just 60 km to travel in about 2 hours and 20 minutes. Being an itinerary to be enjoyed stop by stop, plan to devote a whole day to this trip. The advice is to leave with the cars early in the morning in order to have all day to complete the tour: in any do not worry, every hour there is a train leaving waiting for you.

The is to dedicate to this itinerary more days, lounging here and there in the Alps: the return ticket, in fact, allows you to get on and off the train, visit the city where it  and leave when you want.

The Bernina Red Train is also bike-friendly: you can get on board with your bikes unless you expressly forbid it. There are different combinations of tariffs, for the first and second class, and also pass valid for several days as, for example, the Graubünden pass.

There's something for everyone in the world of Bernina's Red Train: all that's left is to get rid of a backpack, skis and wide eyes... all in a carriage!

More in this category: « No man’s land: the 10 most fascinating abandoned places on Earth Flåmsbana: the green train that crosses the Norwegian fjords »