Eight thousand are the kilometers of coastline in Spain, and among these, there are several corners and many nudist beaches. Today we present the most beautiful.

Accessible only by sea, this beach is right in the center of Santander. The pier is located opposite the Botín Center. Only 300 meters from Punta Rabiosa is the El Puntal chiringuito. The beach offers beautiful white sand dunes and a panoramic bay on the La Magdalena peninsula. 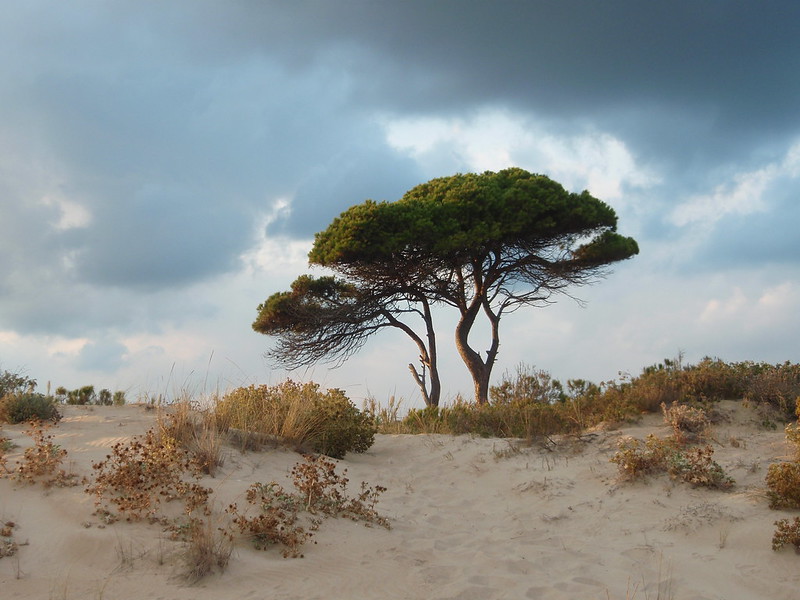 A splendid dune system of almost 2km, a part of which is dedicated to nudists. To reach this beach area you can park at the Centro de Actividades Medioambientales Cal Bofill, then take the walkway that runs along the dunes (called Las Montañas). During the year (except for the hottest periods in summer) the water areas behind the dunes are rich in fauna, and it is an excellent area for birdwatching. To end the day nothing better than a seafood dinner at the El Vaixell restaurant. 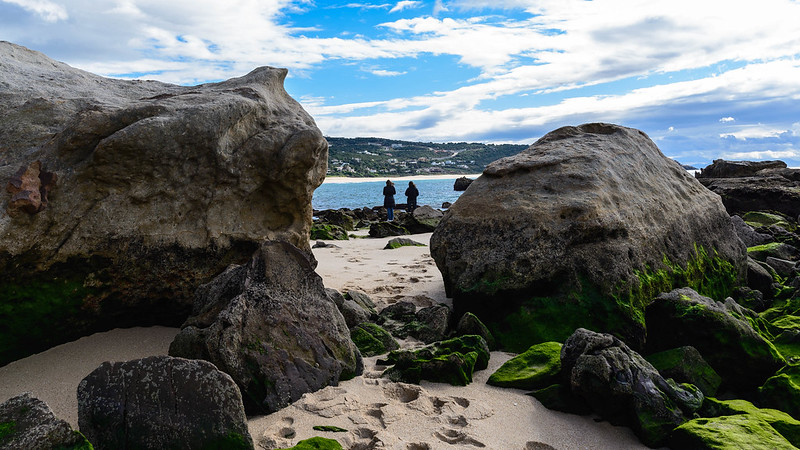 One of the most beautiful beaches on the Lucanian coast: 135 meters of fine sand, with pine and eucalyptus trees behind it. To reach it you pass by Cangas de Foz and Burela, park in Areoura and, hidden among the buildings under construction, you will find the descent to the beach. Just 3km from the Lugar de Sixto restaurant, not to be missed. 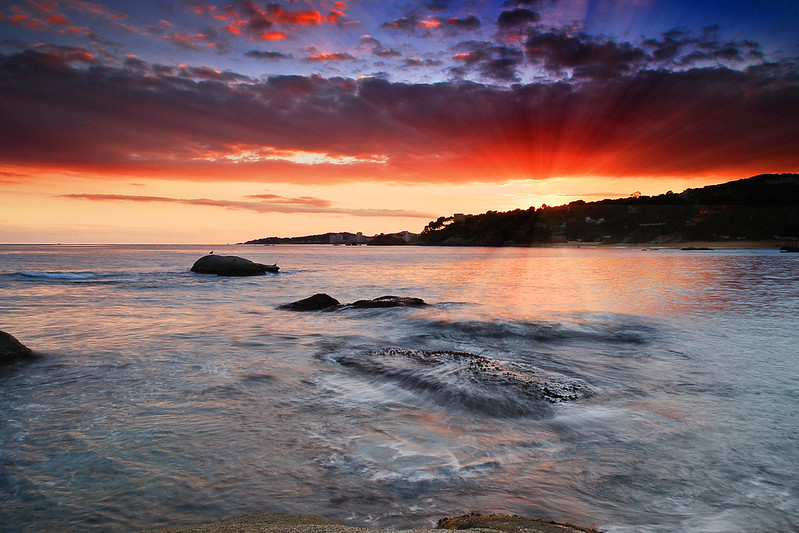 From Sant Antoni de Calonge, parking at the Torre Valentina and after about 15 minutes on foot, this virgin beach paradise opens up, surrounded by beautiful pine trees. In reality, there is not much sand, but large smooth rocks, some of which emerge just from the water. Panoramic view of the Bay of Palamós, Roca Foradada, and Espalda de Ballena. To end the day, the Guillermo restaurant.

One of the Canary paradises still little visited. From the GC200 Agaete-La Aldea, at km5, we will find the junction that descends through the gorge that leads to the sea. In fact, we are at the center of Tamadaba Natural Park. The beach alternates areas of volcanic sand with pebbles, and the bath can be dangerous, but the visit is worth it. 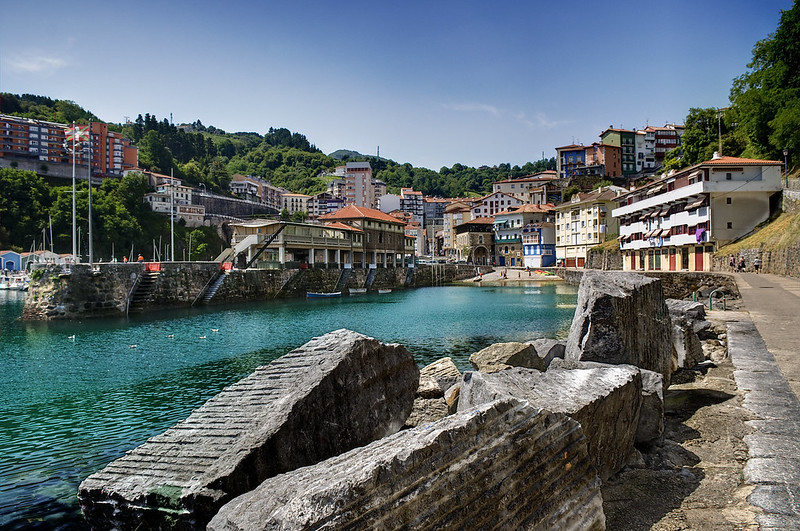 The beautiful Saturrarán beach is ideal for a walk to Atxeku, where you can visit the dairy of the Count Motrico. From the dairy down a staircase that leads directly to the sea. On the way back you can stop in Ondarroa, to try the excellent tapas. 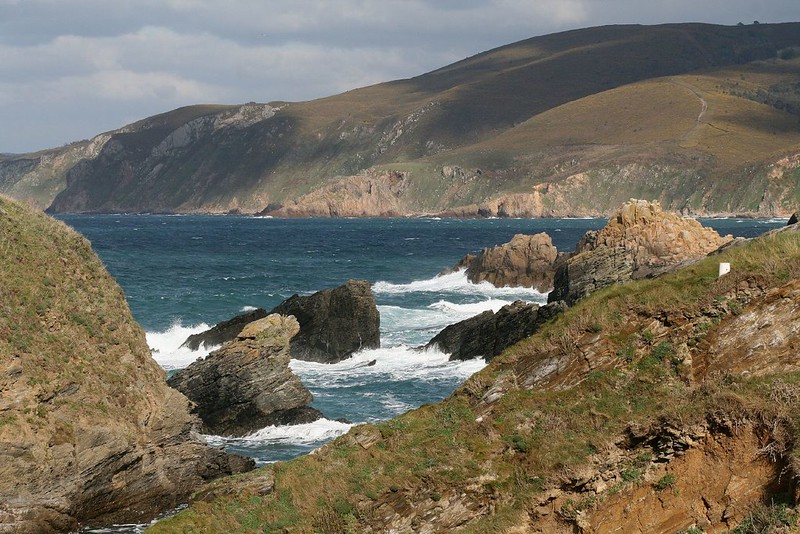 Extensive, splendid beaches dominate the Ferrol promenade. A wild and natural landscape, accessed by a stone ramp. Do not miss the dawn, with the low tide, when the “ojos vidales” are gathered, famous shells with which the famous amulets of the region are made. The remains of the ancient gold mine (a cylindrical tower and a series of wash houses) mark the beginning of the naturist area. Pay close attention if you dive into the sea, the current here is particularly dangerous. 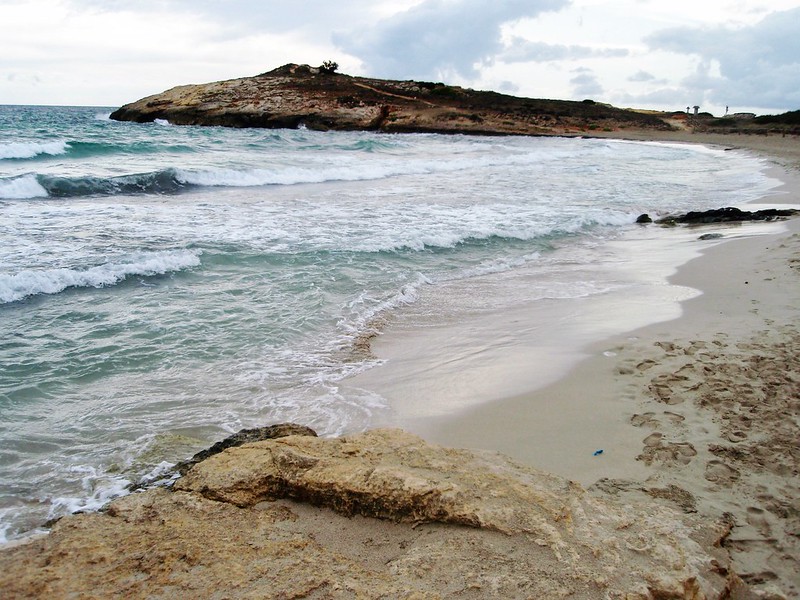 The longest beach in Menorca (about 2.5km), offers fine sand and a unique landscape. The central area of ​​the beach is occupied mostly by hotel guests, so it is best to move to one of the two ends of the beach. The dune system (protected) creates a slight slope towards the sea, then merging with the surrounding greenery, creating a truly special landscape. Son Bou is the second largest wetland on the island and, during the winter, is the destination of numerous species of birds, which find shelter there. Son Bou can also be reached on foot from Santo Tomas (Es Migjorn). 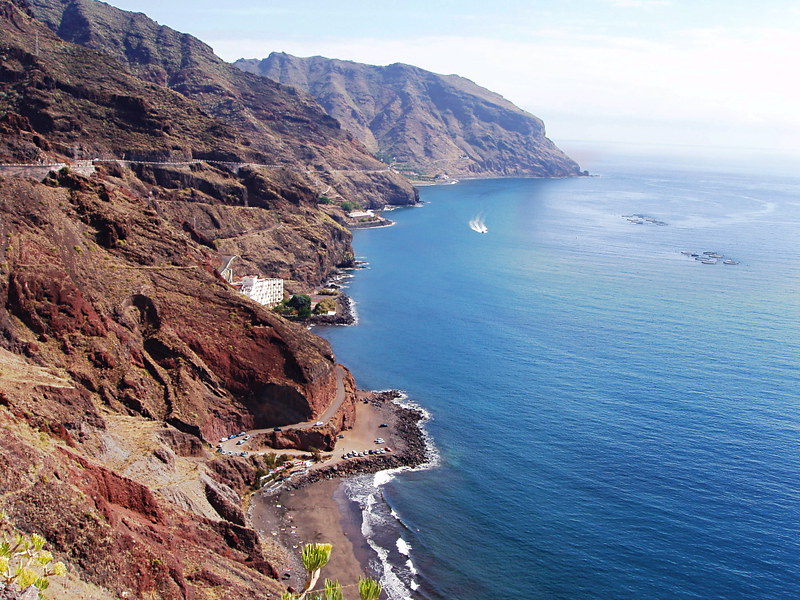 Las Teresitas' naturist sister, just 3km from San Andrés. Closed for some time, to allow repairing and resurfacing the road to reach it, Las Gaviotas is a beach open to naturists and not. Attention with the currents in the water. 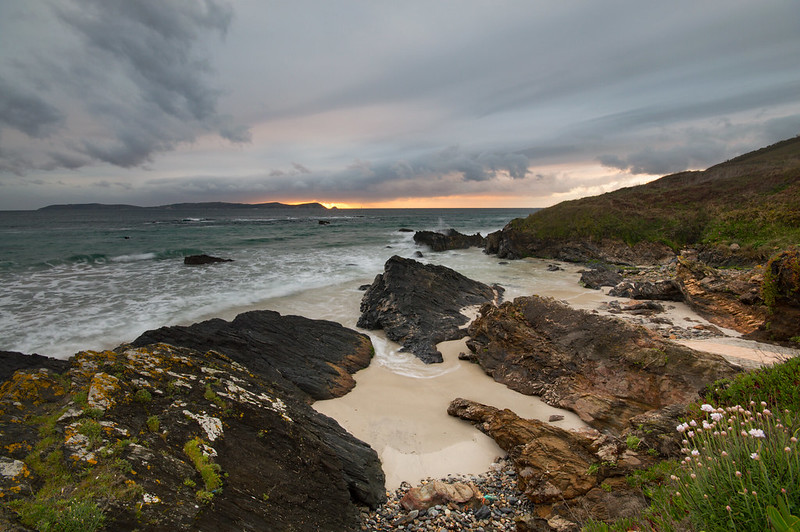 Spectacular crescent of sand, surrounded by a rustic and wild landscape, 100% dedicated to naturist tourism. Extremely beloved, and therefore always very popular, it is worth seeing outside the canonical summer period, targeted by local families. The whole beach is well sheltered both by the northern winds which, even in summer, can be annoying, as well as by summer storms, thanks to the presence of the Ons islands. The entry into the sea is degrading and progressive, and the beach is splendid at low tide, when you walk among the rocks that emerge from the sea. Next to the beach, with 40 years of history behind it, is the Cany Playa restaurant, specializing in squid and fish sandwiches. 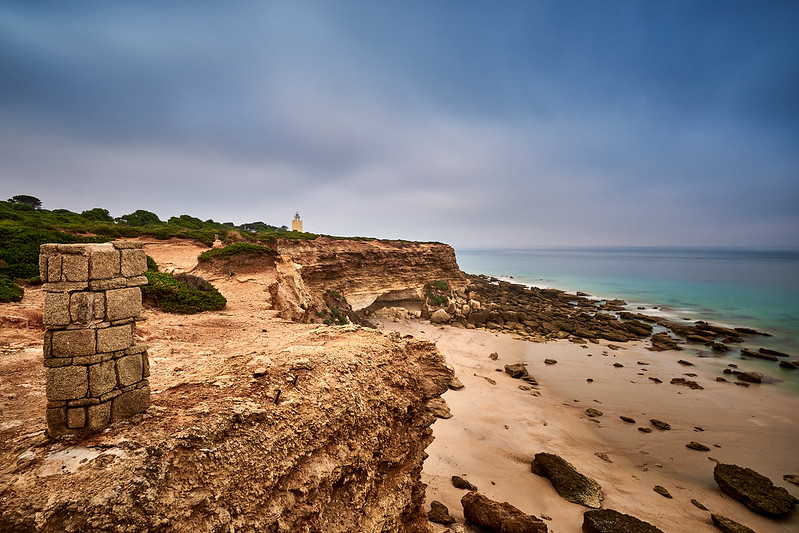 Nine are the coves that divide the coast of Roche and the different shades of the Atlantic, with over 30 meters of cliffs behind them, on which loud and powerful waves break. Splendid sunsets, which inflame the sandy shores of red and clayey sand. At 150 meters from the watchtower converted today into a lighthouse, is the lookout point.

On the east coast of the island, a hidden gem. It is located about 4km from El Cotillo, and can be reached after following

a dirt path, past a small mountain and descending 132 steps. But it is a jewel. Playa de las Escaleras (or del Águila), guarantees pure freedom: open to the Atlantic and beloved by surfers. 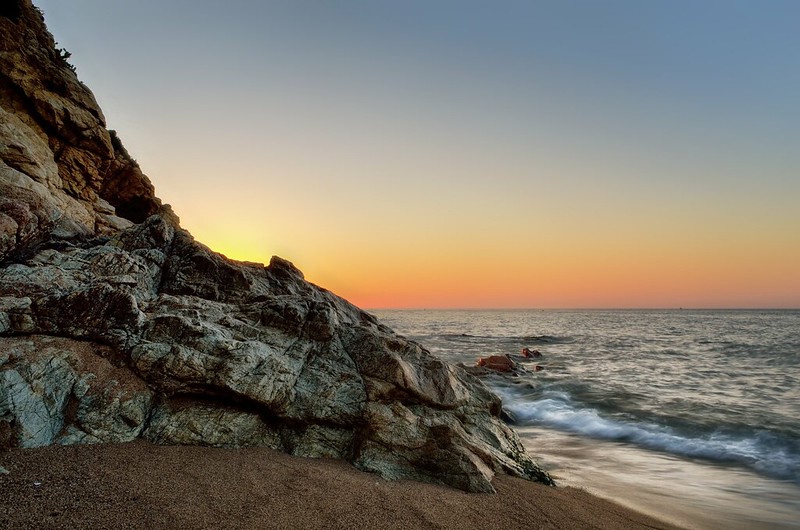 Right at the point where the Montnegre massif meets the sea, one of the most beautiful beaches on the Barcelona coast is hidden. Leave the car next to the lighthouse, and continue along the underpass. La Vinyeta is a beach of coarse and golden sand, with a chiringuito for the paella of midday and a wall equipped for those who want to try their hand at climbing on the sea. At about 100 meters, after a rocky point, the naturist part begins, quieter and more relaxed. Attention however: the passengers of the trains that pass nearby, have a couple of "indiscreet" seconds to contemplate La Vinyeta. 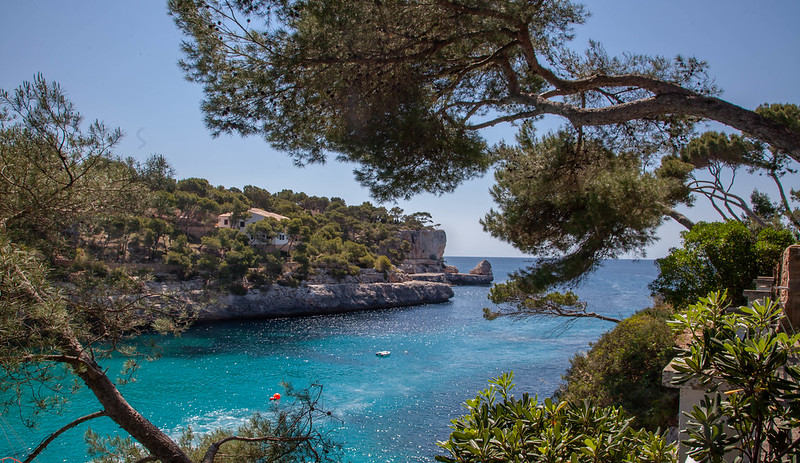 Few beaches like the remote Es Caragol manage to kidnap the Majorcan "Robinsons". It is accessed from the lighthouse of Ses Salines, about a 15-minute walk: to welcome visitors a splendid dune system dotted with Marian thistles and lirium. Clear and transparent waters accompany a soft and welcoming beach, at the end of which rises the rocky Punta Negra. 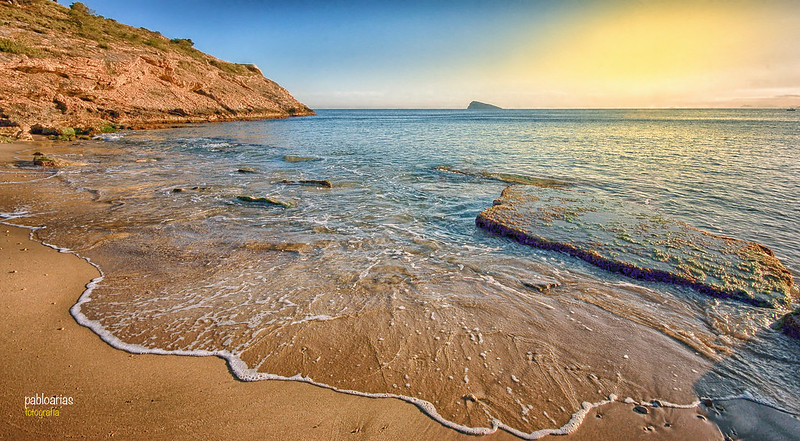 It is said that in Benidorm there are no "officially" nudist beaches ... but nudism is practiced without problems in the natural park of Sierra Helada, in small, delightful coves. The Almadraba takes its name from when this type of fishing was practiced here (La Almadraba is a trap), of which the inhabitants of Benidorm were true masters. It is a pebble cove, but hidden and very quiet. 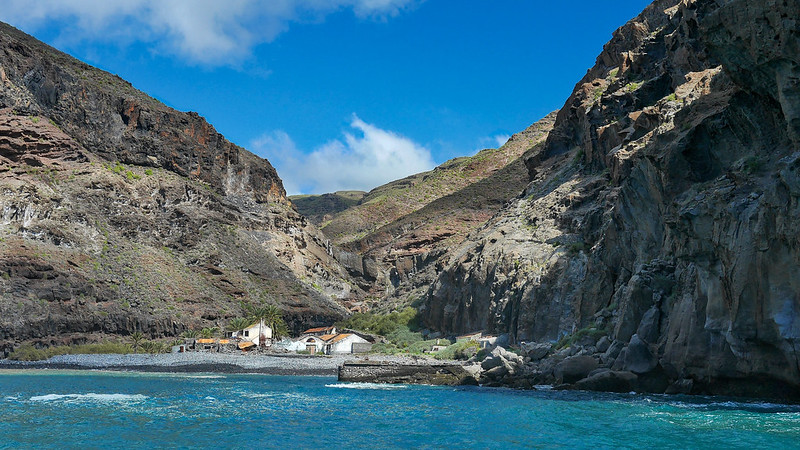 Complicated access, which is why it is called "the cove of adventure", which includes a final jump (where once there was a rope that connected the two stretches of land). From the beach of Santiago one passes, on foot, to that of Chinguarime, whose caves are today inhabited. But few know, that a little further on is one of the most beautiful corners of the island, once chosen by fishermen to shelter from storm surges. The beach can be there or not - it depends on thunderstorms. 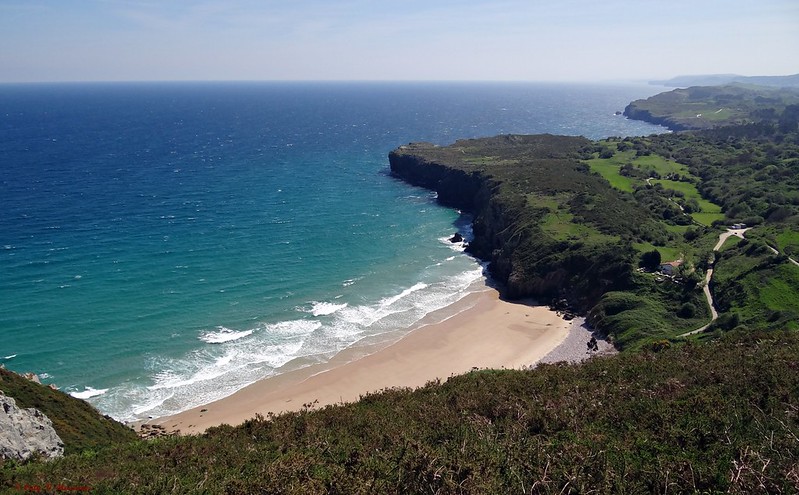 Ballota and Andrín, is one of the most famous and photographed beaches of the Asturian coast, thanks to the viewpoint of La Boriza. The naturist part is also the least known, separated from the rest by El Cuchillón, a rock that appears to be a cyclopic natural screen.

More in this category: « 8 destinations perfect for the fall The 10 best cities in the world for vegetarians »